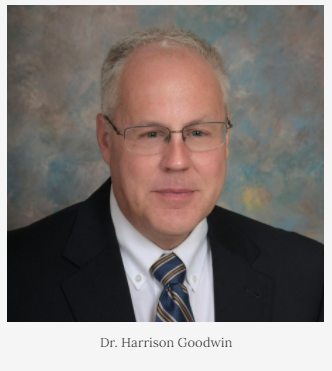 Harrison Goodwin is originally from Camden, SC. In May of 2012, Dr. Goodwin was appointed Superintendent of Chesterfield County Schools and officially took on those duties in July of 2012. During his tenure in Chesterfield County, the district and its schools have received many accolades. Under his leadership, the district received their first ever Excellent on the South Carolina State Report Card.

Dr. Goodwin serves on numerous boards and has held many offices in education related organizations including the South Carolina Association of School Administrators (SCASA), South Carolina School Boards Insurance Trust, South Carolina Association of Governmental Organizations, Northeastern Technical College Board of Commissioners, and Chesterfield County First Steps. He served as the president of the Superintendent’s Division SCASA during the 2019-20 school year and as the president of SCASA in 2020-2021.

Dr. Goodwin holds both a bachelor’s and Master’s degree from Clemson University and a Doctorate in Educational Leadership from Nova Southeastern University in Fort Lauderdale, Florida.